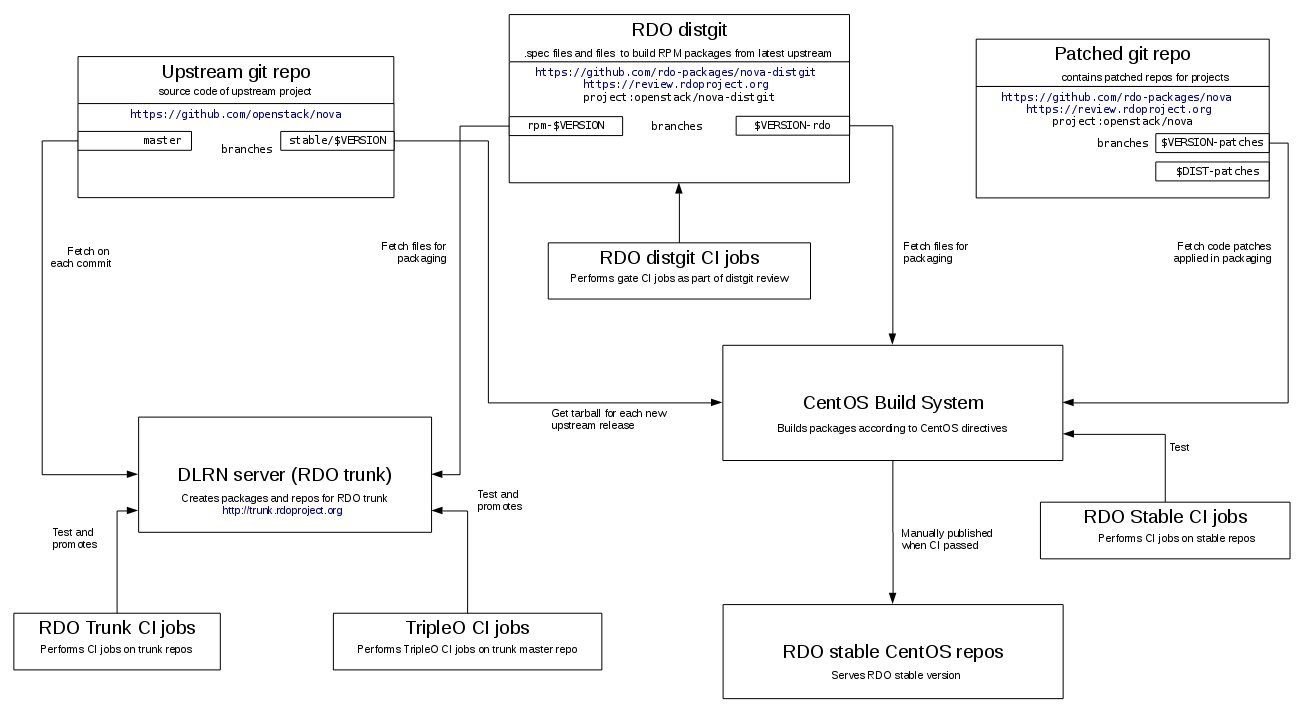 distgit - where the .spec file lives

distgit is a git repository which contains .spec file used for building a RPM package. It also contains other files needed for building source RPM such as patches to apply, init scripts etc.

RDO packages' distgit repos are hosted on review.rdoproject.org and follow $PROJECT-distgit naming. You can navigate the full list of distgit repos using this link.

You can use rdopkg to clone a RDO package distgit and also setup related remotes:

Because of the different build tools used for RDO CloudSIG and Trunk repos and the differences in dependencies and content in packages for each OpenStack release, RDO maintains several branches in distgits:

There are a number of expected differences between the spec files in rpm-<release> and <release>-rdo branches:

As previously stated, the rpm-master branch is used to package RDO Trunk using the master source branch. However, There are two RDO Trunk builder building packages from that branch:

Initially, both builders use the rpm-master distgit branch. However, we may find an issue for a client or library in master-head that does not show up on the main builder yet. In those cases, we will create a temporary distgit branch called rpm-master-head, where the fix will be merged.

Having this temporary rpm-master-head branch will allow us to fix the build for the package, and once the change in the master repo reaches a tagged release used by the main builder, we can simply cherry-pick the change and remove the temporary branch.

Because we rebase often in RDO CloudSIG repos, manual management of patch files in distgit would be unbearable. That's why each distgit branch has an associated patches branch which contains upstream git tree with extra downstream patches on top.

A distgit can be automatically updated by rdopkg to include patches from associated patches branch and thus RPM patches are managed with git.

Individual RDO patches are maintained in form of gerrit reviews on review.rdoproject.org.

rdopkg is a command line tool that automates many operations on RDO packages including:

rdopkg is a Swiss army knife of RDO packaging and it automates a number of repetitive and error prone processes involving several underlying tools, each with its own quirks.

rdopkg source lives at softwarefactory-project.io but it's also mirrored to github.

Bugs are tracked as github issues.

rdoinfo is a git repository containing RDO packaging metadata such as releases, packages, maintainers and more.

rdoinfo lives at review.rdoproject.org and is also mirrored to github.

Most of the metadata is stored in rdo.yml and deps.yml, tags and buildsys-tags are stored in multiple YAML files as described below:

DLRN is a tool used to build RPM packages on each commit merged in a set of configurable git repositories. DLRN uses rdoinfo to retrieve the metadata and repositories associated with each project in RDO (code and distgit) and mock to carry out the actual build in an isolated environment.

DLRN is used to build the packages in RDO Trunk repositories that are available from http://trunk.rdoproject.org.

NVR for packages generated by DLRN follows some rules:

In order to build an RPM with the master packaging you'll need to install DLRN, following the instructions described in this README.

Once DLRN is installed, run dlrn for the package you are trying to build.

This will clone the distgit for the project you're interested in into data/openstack-cinder_distro, you can now change this packaging and rerun the dlrn command in test your changes.

If you have locally changed the packaging make sure to include --dev in the command line. This switches dlrn into "dev mode" which causes it to preserve local changes to your packaging between runs so you can iterate on spec changes. It will also cause the most current public master repository to be installed in your build image(as some of its contents will be needed for dependencies) so that the packager doesn't have to build the entire set of packages.

When modifying spec files for RDO Trunk keep in mind the considerations shown in Branches in distgits and follow the recommendations in the RDO Packaging Guidelines. Once you are happy that you have your changes in distgit ready to be reviewed, create a git commit with an appropriate comment, add a git remote pointing to gerrit and then submit your patch

To look at all open patches for the upstream packaging simply use the this link and look for your desired project, for example openstack/cinder-distgit.

Packaging files for CloudSIG repos live in $RELEASE-rdo branches of distgit. Patches can be introduced as needed through associated patches branch.

rdopkg clone takes care of getting the package distgit and also setting up all relevant git remotes defined in rdoinfo. Use -u/--review-user option to specify your github username if it differs from $USER.

The simplest kind of change that doesn't introduce/remove patches or different source tarball.

Although this change is simple, rdopkg fix can still make some string manipulation for you. In following example, I add a new dependency to nova package:

After this, rdopkg generates new commit from the %changelog entry you provided and displays the diff:

Finally, send the changes for review:

Following schema shows the workflow to maintain patches applied in the packaging process.

Once the patch gets approved (not merged), you can tell rdopkg to update the distgit and send the .spec change for review:

tl;dr rdopkg new-version should take care of that:

Inspect resulting distgit commit and if you need to adjust anything, use rdopkg amend to amend and regenerate commit message from changelog.

Finally, once happy with your change submit it for review with