OpenStack services usually need some pieces of software which are not developed as part of the project. They are are general purpose libraries (typically python modules) or services used in some way to run or build OpenStack packages as databases, messaging brokers, etc…

OpenStack requirements project defines the policies and processes to manage requirements in upstream projects from a global perspective.

RDO provides all requirements for packaged services in RPM format from their own repos, so that no software should be installed from external repositories. This packages can be provided by:

If you have questions or special requests, don't hesitate in contacting RDO using our mailing lists or #rdo channel in freenode.

Adding a new requirement to RDO

When a new requirement is needed for an OpenStack project included in RDO, package maintainers must follow this workflow: 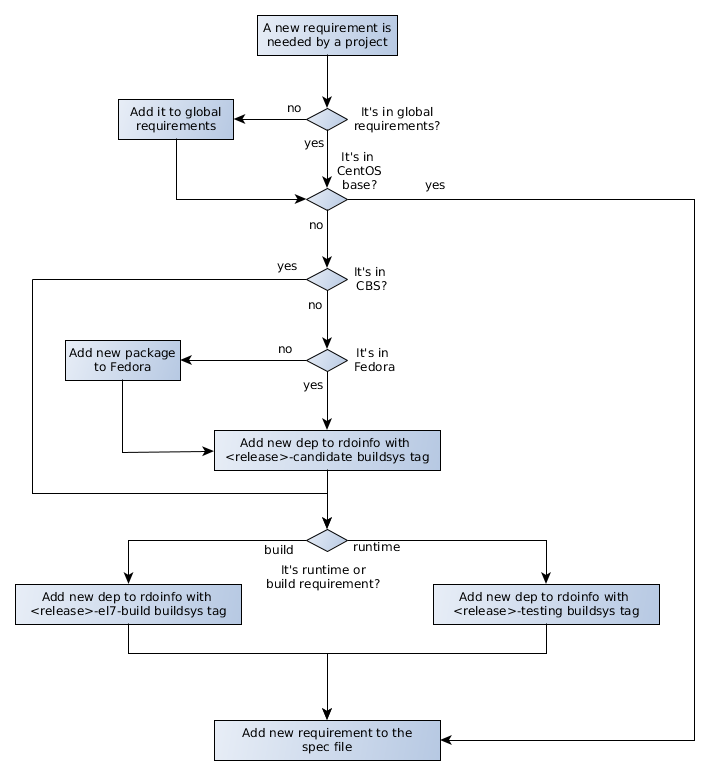 Note that, typically new requirements are added only for the release of OpenStack under development, not for stable releases, although they may be accepted in previous releases if it's properly justified.

There are some rules to follow when a requirement update is needed by a OpenStack project:

If you have questions or special requests about requirements, don't hesitate to contact RDO community members using our mailing lists or #rdo channel in freenode.